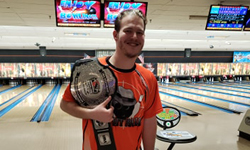 This Saturday’s match-up was made possible back in March when James Kniffen (Hitmen) beat Prell in 7 games in the Regional Champions match at Mega Bowl. Williams’ title shot was originally scheduled for the end of March against Prell, should he not win the World Title. He didn’t, so nine months later, we finally get our long awaited Heavyweight Title Match in the Northeast!

Prell won the title back in February at the Northeast Unholy Alliance against David Nagelhout to start his 2nd reign as heavyweight champion (Prell’s previous reign was back in 2016 at Old School 2) despite losing two other chances the previous season to win the title (lost to Ray Smarsh and Miguel Acobo). On paper, this looks like advantage Prell at Lodi Lanes. However, according to the champion, he has not been up to par when it comes to bowling recently since the pandemic hit. For Prell to continue as Heavyweight champion after this month, the champ will need to dig deep and bring out the old Prell we have seen in years past to give Williams a rough time in this final title match of 2020.

Speaking of rough (or “ruff”) times, in the other corner, George Williams has been bringing all the “ruff times” to his first five matches in his short WCS tenure on the heavyweight list. Williams started on the list in October 2019 and has gone undefeated in five straight matches on his way to the title match, including two former world champions (Ray Smarsh in November, Niko Rivera in February). Can Williams find the momentum again to climb his way to the top of the heavyweight list in the northeast?

On paper, I normally would give the edge to the champ for two reasons, 1) alone on the left side 2) Very familiar with Lodi. However, with the champ’s sluggish return to bowling from the pandemic. Expect this match to go either way. I would not be surprised to see the challenger win 4-1, otherwise, expect a 4-2 victory either way with one bowler going up 3-1.