Note: This Column is presented by Ray Gillespie 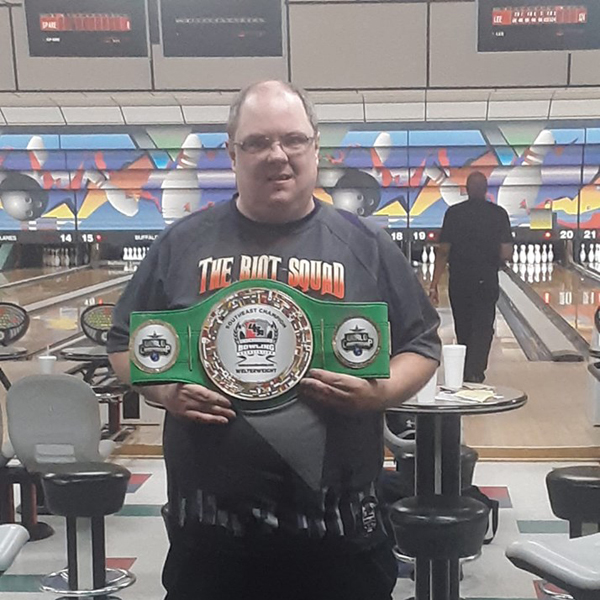 This week, I had the pleasure of talking to Mike Wakefield Jr. We talked about his WCS Welterweight Championship Match where he became the champ for the first time. Mike, 38, lives in Wake Forest, NC and is a member of The Riot Squad. He works the main grill and fryer at Manhattan Pizza. He has been bowling since he was 12 years old where he actually bowled a 202 his first time out. He has a 300 and a 797 under his belt as well.
Coming into the match, Mike “felt more than good” about how he would do. He worked on his game all summer. He was in attendance for his team’s attempt to qualify with a good spot for team rankings prior to his match. Not only was Mike there to support his team, he was able to watch the ball motion and how the lanes were breaking down. When he started his match, he had a “great idea where to start and what ball to use.” During his match, they were tied 2-2 when Mike whiffed a 6 pin in the 10th to lose by one. He acknowledged that he was “mad and upset” because his foot was sliding out from under him previously shooting near the 6 and it got in his head. Mike knew he had to “stay focused” on the task at hand and move past it. Mike won the series in 7.
When asked why he wanted to join the UBA and fight for the Welterweight Belt, at first, he “was looking to meet new people” and he enjoyed the trash talk because it helps him to relax. Going after the belt was to show that he was the best and still has what it takes on the lanes.
When the rules mentioned videos, Mike was nervous because of his “speech problem.” Being bullied, and picked on, in school because of it has really stuck with him. When he found out my son has had similar issues with his Autism, Mike offered up that he needs to “believe in himself” because if he doesn’t then “no one will.” Mike has great character and is liked by many outside of his team. There have been numerous comments made about there is not a nicer guy in the UBA. When I asked him about those comments, he said he tries to like each one and it “means a lot to see so many good things said” about him.
Thank you Mike for being a great model for others that have had the same obstacles as you. Good luck holding on to that belt for many months ahead. Mike is currently scheduled to be defending his title at SE Unholy.