The Doctor (and Dansbury) are in with their predictions. 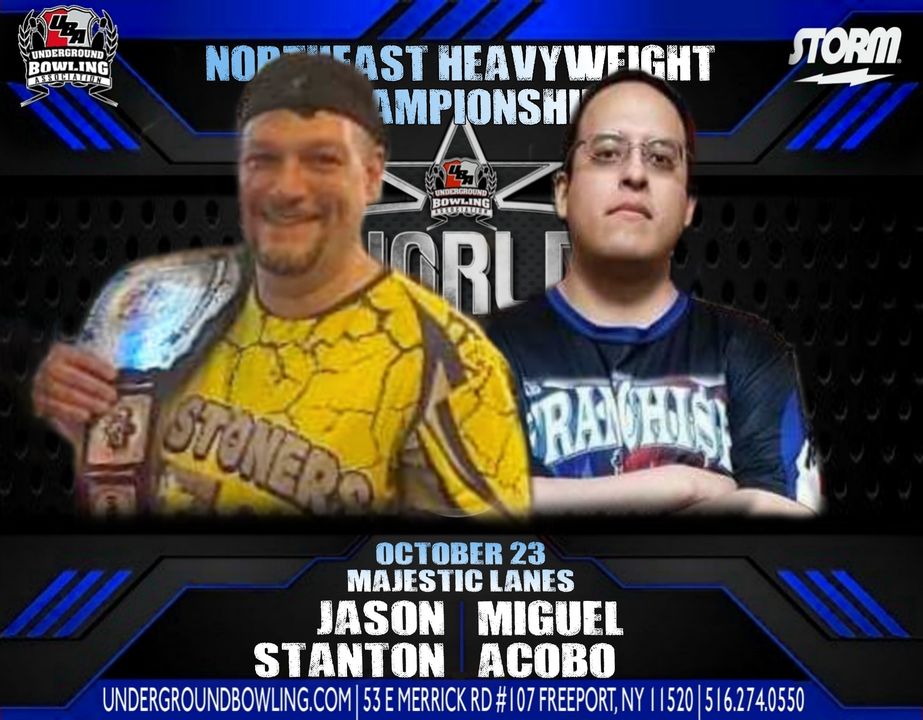 Northeast WCS Title Match Predictions
October 2021
NORTHEAST HEAVYWEIGHT TITLE MATCH – STANTON VS. ACOBO
The DMV is riding their wave high on Jason Stanton grabbing the heavyweight title for the region last month, defeating Ducky Russell in his backyard 4-1 at Westbrook Lanes. Miguel Acobo is no stranger to title matches. The 2-time former Northeast Heavyweight and former World Champion sim for his 3rd time around as Heavyweight Champion in the Northeast! Will Stanton be able to keep his title or will the veteran experience of “El Tiburon” reclaim the belt for the 3rd time?
We predict that Stanton will have his first successful title defense in a 4-2 victory.

NORTHEAST CRUISERWEIGHT TITLE MATCH – ANDES VS. KIM
Champion Bryan Andes continues his reign with the Cruiserweight title since winning the belt over teammate Raul Renteria in June. Since then, Andes has made two successful title defenses against two tough competitors (Tyrone Curry at Majestic Lanes and Justin Doslik, which at the time was undefeated in WCS matches since his start on the Welterweight list and continuing on the Cruiserweight list, at Battle Bowl). Andes aims for his 3rd consecutive title defense after a short break since Battle Bowl, and his first for the 2021-2022 season. Jae Kim is no stranger to title matches, despite his last time in a title match was during the 2019-2020 season. Kim is a former Cruiserweight Champion, but held the belt for one month after losing his first title defense to Little Buda (William Brown) in January 2020. Kim hopes to overthrow his reign and bring the title back with him for a second time. Who will come out with the title?
Given Andes’s performance over the past couple of months, it is assumed he will come out with the title. However, in this New Jersey Northeast battle, we predict that Kim will come out with the upset, winning the belt for the second time 4-2.

NORTHEAST WELTERWEIGHT TITLE MATCH – GREENE VS. WAHNON
Ian Greene became the second bowler from BOA to win the Welterweight title during the shortened 2020-2021 season at Battle Bowl (Lore Galan won the belt at 2021 Northeast Unholy Alliance over Julio Hernandez). Greene was able to come away with the title over Philly Horsemen’s Lisa Williams (who became the second female to win the belt at the time) in 6 games. Making his title match debut, William Wahnon hopes to ruin Greene’s first title defense since becoming champion in August. Wahnon has been a veteran of the WCS, also on the Cruiserweight list and Classic Tag Team lists for the past couple seasons but has not made a title match until now. Will Greene keep his title?
We predict that for all the time and hard work put in for Wahnon on the WCS will pay off this Saturday at Majestic Lanes and comes out with the Welterweight belt in 5 games (4-1).

NORTHEAST CLASSIC TAG TEAM TITLE MATCH – SECRET SOCIETY VS. CONTRACT KILLAZ
For this run from Secret Society, we have seen a number of changes with this team since the start of the 2020-2021 season. Jaraard Watson/Anthony Stone (changed due to over cap to start new season) -> Jaraard Watson/Karla Pereira (change due to injury) -> Eddie Williams/Karla Pereira (change back to start new season) -> Jaraard Watson/Karla Pereira. The one constant that remained was their winning ways during this run. Secret Society won the belts back in June at Lodi over Dysfunctional Bowlers Renteria/Andes. Since then, two successful title defenses have been 7-game nail biters (Josh Valdes/Jose Valdes in July, Rex Schofield/Francis Schofield at Battle Bowl). Their next challenge, Mike Waltz and Salome Samuel. The team from Contract Killaz will look to bring the belts back to the DMV since three years ago when Kryptonite’s Rob Bateman/Naomi Reece won the belts at Bowlero North Brunswick in October 2018 (Kryptonite def. Powerhouse 4-1). For Waltz/Samuel, they are making their first title match appearance after a couple of previous #1 contender match losses. Will the run of Secret Society continue or will the DMV add another belt to their collection?
We predict that Secret Society will have their 3rd successful title defense in another 7-game nail biter.

NORTHEAST UNCAPPED TAG TEAM TITLE MATCH – DYSFUNCTIONAL BOWLERS VS. MASS DESTRUCTION
To kick off the 2021-2022 season, Raul Renteria has taken his original spot back on his tag team since the Uncapped Tag Team division started. Renteria and Nagelhout were the first champions of the Northeast Uncapped Tag Team division. At the time, Renteria also held the Classic Tag Team belt and decided to go with the Classic belt. In that time, well…nothing changed except the bowler taking Renteria’s place (Matthew Frei-Funk). This Dysfunctional Bowlers tag team still remains to this day as the only Uncapped Tag Team Champions in the short history of the Northeast Uncapped Tag Team division. 11 wins overall, 8 wins in title matches, 7 consecutive title defenses, 756 days since first qualifying to enter the division. Over two years now without a loss. Standing in their way of getting to 12-0 is a team they defeated last season. Mass Destruction’s Tyler Wilson and Matt Grayauskie (at the time of the last title match, the team was Bonamico/Garyauskie). Mass Destruction is looking for a little retribution as their last loss was against this team in their only title match so far back in May. With Tyler Wilson now teaming up with Grayauskie, Wilson is looking to make a positive impact this time around for Mass Destruction and hopefully end the 2 years reign of Dysfunctional Bowlers’ undefeated streak. Which team comes out victorious?
We predict that with Tyler Wilson making a presence on the left side of the lane this time for Mass Destruction, Wilson/Grayauskie will hand Dysfunctional Bowlers their first loss in 7 games.