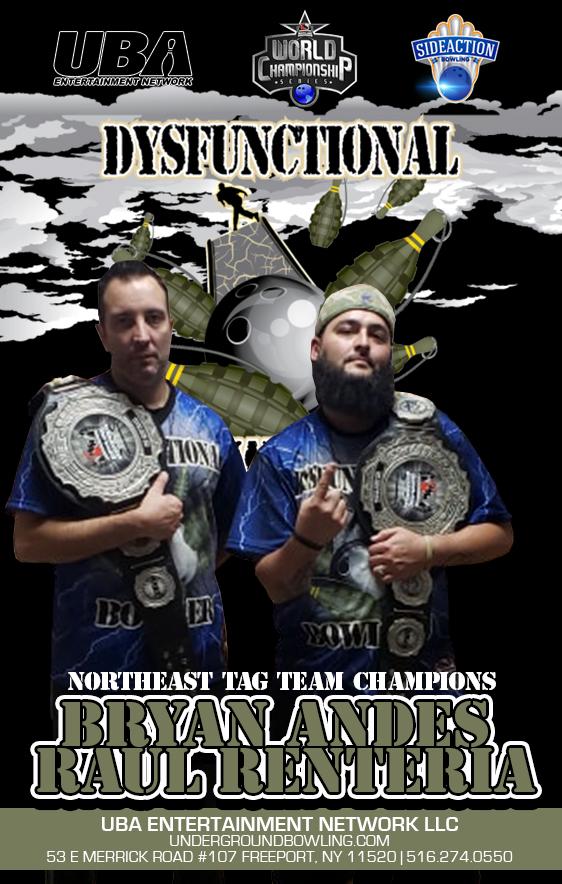 Yes, this is not a typo in any of my articles; Renteria has been a key contributor to the team’s success in the WCS in the 2019-2020 season (Cruiserweight, Uncapped and Classic Tag Teams). DB won the CTT titles back in October 2019 at Northeast Last Man Standing at Lodi Lanes against Showtime’s Vernell Butler-Lomax/James Morse. This team has had its shares of struggles in the last couple of seasons, winning a few matches, losing a few and getting knocked off the list. Then October 2019 came around and everything came together for this duo. Since winning the titles, they have successfully defended the titles four matches in a row including a win over arguable the greatest Classic Tag Team champion in the history of the WCS Hedges/Mazza (November), Bobby Reece/Naomi Reece – Kryptonite, (December), Shawn Kos/Chris Lewis – Sheer Vengeance (January), Chris Hedges/Rocco Mazza – Murder Inc. (February) and William Wahnon/Jessica Rosas – Suicide Squad.

What is unique about this run of five wins in title matches is each team represents a different state (Showtime – Pennsylvania, Kryptonite – Maryland, Sheer Vengeance – Connecticut, Murder Inc. – New Jersey, Suicide Squad – New York). To say this team has faced various types of competition from different states would be an understatement.

Opposing the championship duo this Sunday is a fairly new team joining the ranks of the Classic Tag Team list. Bowling Bullies’ Dennis Knox and Eva Purcell qualified at Battle Bowl 2019. Dennis Knox has had experience in the tag team division prior to this run with his partner Purcell, despite that run being an 0-2 elimination run with his previous team Lightz Out. What Knox learned from the experience in those matches has paid dividends as Knox/Purcell have made a run to this month’s title match, posting a 5-1 record since joining the CTT list.

In a return matchup since the pandemic, I would go with the champs in this matchup, especially having won the belts in this establishment (Lodi Lanes). However, if the has been anything to learn since the pandemic hit, it is that bowlers still have some rust to shake off having the kind of break just about everybody has had from the shutdown. In addition, this Bowling Bullies team is not to be underestimated, not a lot of people had this team making a title match and here they are! My prediction… Dysfunctional Bowlers 4-3.