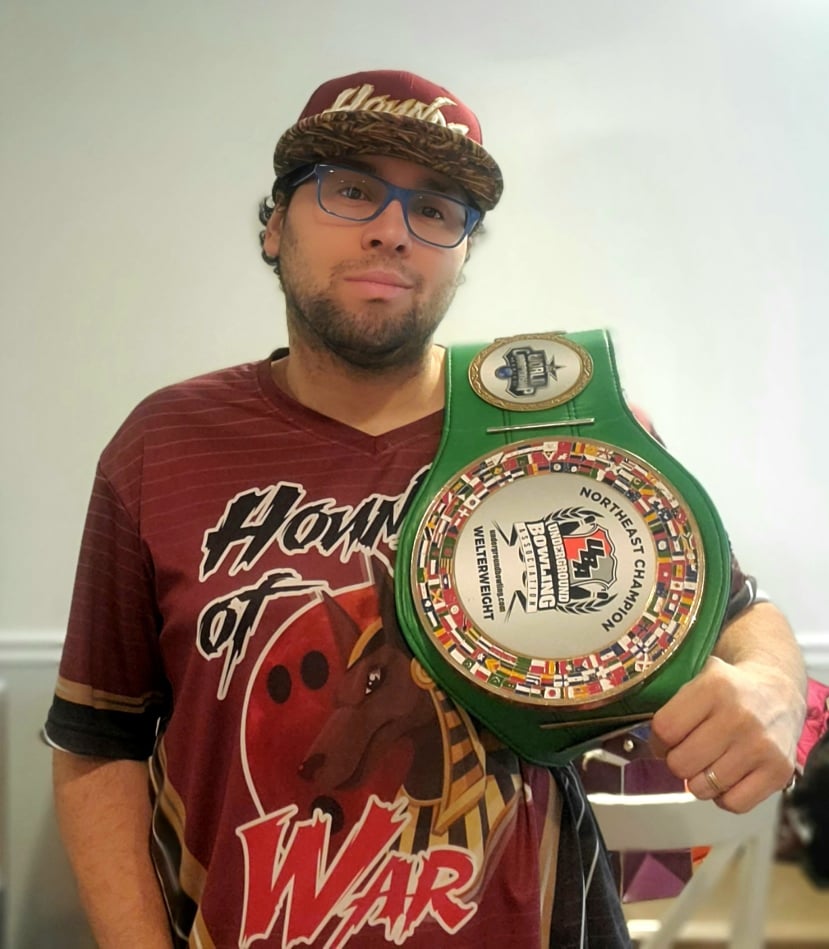 The Northeastern Welterweight Champion is Julio Hernandez from Hounds of War, a team out of the New England South District.

How did he get into bowling?

Julio started bowling in high school and a junior league at Ball Park lanes with friends. He liked bowling but baseball was his #1 sport. When he went to college, life happened, and he stopped bowling for a long time. About 6-7 years ago, his friend Leo who he played baseball with asked him to join a bowling league. It was from there that he was drawn back to bowling. Bowling is now his #1 sport.

What led him to his current UBA team?

Some of Julio’s bowling friends were wearing jerseys and he asked them about it. They told him it was for the UBA. Julio shared that he wanted to join at that time, but they did not want him. His boy Rudy told Julio not to worry and that he had a team for him. Julio met Jaison and was welcomed with open arms to the Hounds of War.

What has been his best moment while bowling in the UBA?

Julio’s best moment was when he won the Welterweight belt the first time. He was not supposed to or expected to have won. He was ranked #5 at the time and the #1 contender, #2, #3, nor #4 was able. He got a call at midnight before the match to bowl for the title at Lodi. He said hell yeah! And just like that, he was locked into a championship match against a dominant champion in Chris Schenck. It was an absolute classic for 6 games. Every game came down to the final shot. Julio was able to pull off the great upset and come away with the belt.

What do the UBA and his UBA team mean to him?

The UBA means competing at a very high level and participating in a culture that’s absolutely like no other. It is fun, in your face, raw, loud, but most of all entertaining. You must have thick skin and you better not miss. The UBA welcomes all of the unorthodox bowling styles and nicknames. Julio is grateful for all of the opportunities that the UBA and the Hounds of War have provided him.

What activities does he participate in outside of bowling?

When Julio is not bowling, he enjoys food and sports. He likes to eat good food and he loves to cook. Additionally, he loves all sports. If it is on ESPN, he is watching it. If he is not watching ESPN, then he is playing his PS5, co0hostin g the UBA tailgate, spending time with his wife Amy, or taking care of his daughter Mila.

What ritual must be completed while competing in the series?

Julio’s nickname in the UBA is Sicario. That means hitman or assassin in Spanish. The ritual he conducts is whenever he leaves a ten-pin, he has to grab his trusty sniper spare ball and snipe that 10 pin. He has to through the rock, aim, and fire. “All in a day’s work for your friendly neighborhood Sicario”.

The SHOUT OUT Corner!

Julio would like to give a big shout-out to his wife Amy and his daughter Mila. He loves you both and thanks to you for being in his corner always. Shout out to Dino Chang at Dino’s Pro Shop. One of the best Pro Shop Owners in the business. Shout out to his team Hounds of War. Shout out to Rudy who’s been his mentor and his co-host. Shout out to the Sunday Commission family for pushing him to be better every Sunday. And lastly, shout out to the UBA. UBA ALL DAY BABY!!