Will they still be happy after Saturday? 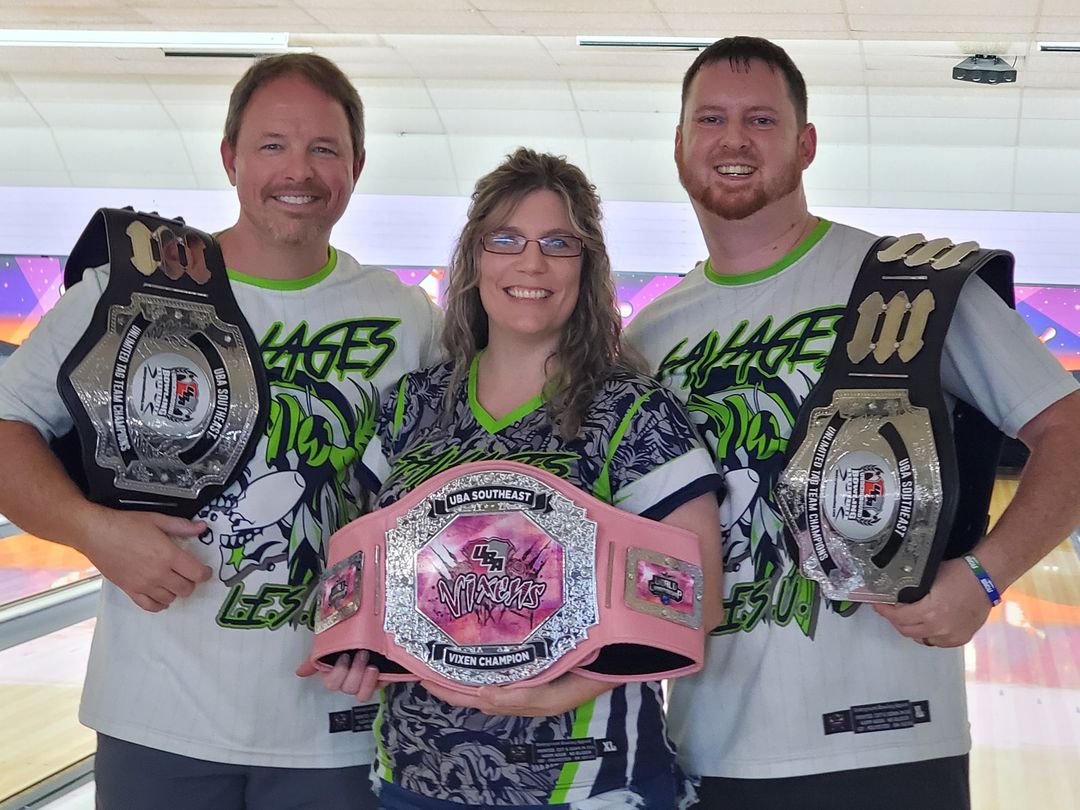 Welcome to November’s World Champion Series predictions in the Southeast! This is a standalone event, where there’s no tournament BUT all of the belts will be up for grabs. These are fun to have in the Northeast and this is the first one this year for the Southeast. Last month, I went 4-2, which is pretty good – but I want to do better this month. Will I be better?

In addition. World Championship Series Southeast Director Ray Gillespie will be joining us with his predictions as to who will win the matches.

Heavyweight Title Match:
Zac Ludwig (CHAMP – Villains) Vs. Jerry Didway (Rollin’ Rebels)
This is, far and away, Ludwig’s toughest matchup to date. Jerry Didway has held the title before – and when he held it, he held it for a VERY long time. Ludwig is going to have to dig deep and bowl like he did Game 7 on his last match. Can he?
PREDICTIONS:
Gordon: Didway wins 4-2 and becomes the new champion.
Smash: Didway wins 4-2

Vixens Title Match:
Daphne Smith (CHAMP – Spartanburg Savages) vs. Meranda Edmonds (NWO)
I’m still eyeballing the end of the year where she and Kasey Parnell may tangle. However, in order to do that, she has to get past Edmonds, who is someone who should not be overlooked. You know what I’d like to say just to see Ray go nuclear – and I think it will happen.
PREDICTIONS:
Gordon: Smith wins 4-2 and retains the title.
Smash: Smith wins 4-2

Cruiserweight Title Match:
Charles Tharrington (CHAMP – G.O.A.T.) Vs. Chris Kivett (NWO)
This is one of three matches that the NWO can bring gold in. This may be the first split decision here, because while Kivett has more than enough talent to get the job done, it may pale in comparison to the veteran skills that Tharrington possesses. Which will hold supreme?
PREDICTIONS:
Gordon: Tharrington wins 4-2 and retains the Cruiserweight title.
Smash: Kivett wins 4-2

Welterweight Title Match:
Kareem Muhammad (Champ – Carolina Rollers) Vs. Lonnie Donaldson (Body Snatchers)
Muhammad has been rolling so far in the WCS. Donaldson is looking to make a name not for himself – but for the Body Snatchers, who have been resting comfortably in the UBA Basement. A title win for them would put them on the map in a huge, huge way. Can Donaldson shatter perceptions? Or will it be same, old same old for Muhammad?
PREDICTIONS:
Gordon: Muhammad wins 4-3 and retains, but just barely
Smash: Donaldson wins 4-3

Classic Tag Team Title Match:
N.W.O. (CHAMPS Michael Gattis & Garrett Sallaz) Vs. Carolina Swag (Brad Kurth & Todd Piatt)
Would Brad Kurth winning a UBA WCS title be one of the four signs of the apocalypse? Maybe, but the key to this one isn’t going to be Kurth – it’s going to be what Piatt brings to the table. He will be the difference – one way or the other.
PREDICTIONS:
Gordon: C-Swag wins 4-3 and the sky opens up unleashing giant spiders all over Greensboro.
Smash: N.W.O. wins 4-2

Uncapped Tag Team Title Match:
Spartanberg Savages (CHAMPS – Ken Foy & Nick Smith) vs. G-Town Heavy Hitters (Jack Ness and Matt Martin)
This should – at least on paper – be the best match of the bunch. Foy and Smith have been dominant, but if anyone can knock them off, it’s this team. It’s going to be hard-hitting, and it won’t shock me if this comes to the 10th frame in game 7.
PREDICTIONS:
Gordon: Savages win 4-3 and retains, but it’s going to come down to the wire.
Smash: G-Town wins 4-2

We’ll see how we do this weekend.