Jonathan and Sagirah break the matches down. 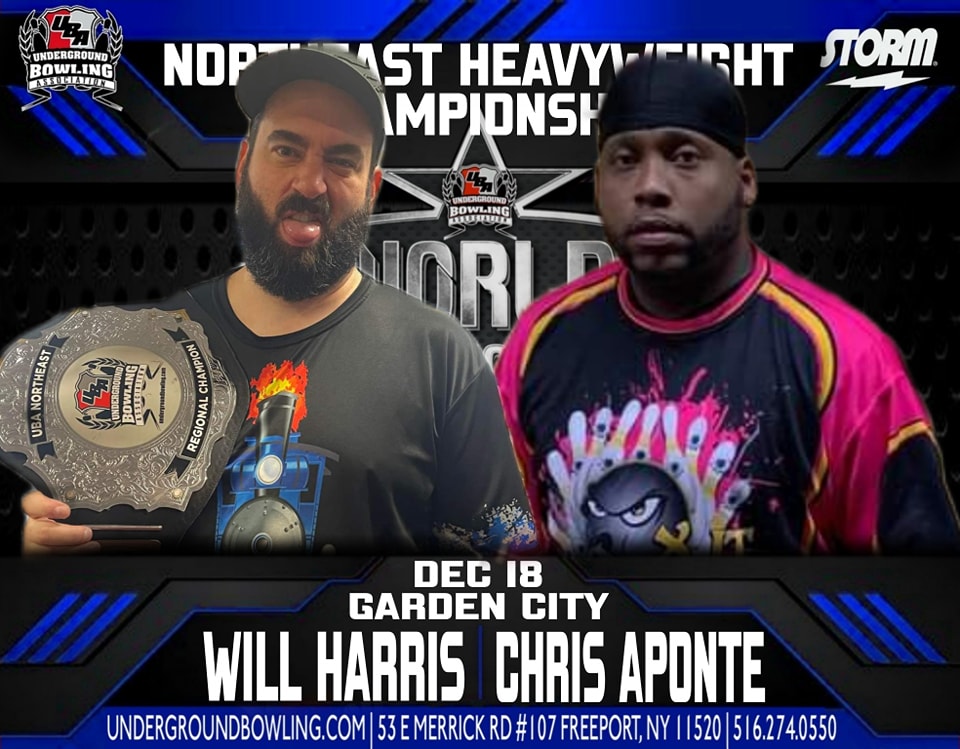 Tiffany Smalls and Da Takeover are riding a HUGE wave of success so far in this early 2021-2022 season. Besides the winning streak for the Da Takeover in Season Tour action, Smalls defeated Hermie Hannibal in November at the Northeast Team Relay to end a 6 month title run for Hannibal to become the Northeast Vixens champion for the first time in her WCS career. Her win came after previous years of struggles on the Vixens list from 2018-2020. Smalls re-qualified at the end of the shortened 2020-2021 season and has remained undefeated on this current run to date.

Smalls next challenge in front of her is a rematch that dates back to September 2018 with another former Northeast Vixens champion from the DMV, Terri Bollinger (Boardwalk Empire). These two faced off in WCS action over three years ago in an elimination match where Smalls got the better of Bollinger in September 2018.

Bollinger is no stranger to the Vixen’s list or holding the title. Bollinger also comes with years of experience on the vixens circuit. Bollinger’s last time holding the title was over 4.5 years ago when she defeated Lauren Scholes (Good Brothers) in May 2017 (at the time, becoming the second Boardwalk Empire bowler to win the Vixens belt. Since then, Yvette Ford, also on Boardwalk Empire, also won the belt for the same franchise, December 2020).

Smalls now has the task of defending her new Belt. Will Tiffany Smalls be able to keep her title on her first defense or will a previous vixens champ, Terri Bollinger, regain the title again after a 4.5 year drought without the belt?

We predict that…while Bollinger brings the experience to the table as a former champion, Smalls will continue to ride the momentum wave of success and have her first successful title defense, going the distance in a 7-game thriller!

Will Harris has made the best of his short run to date on the WCS circuit. Harris made his debut in the beginning of this calendar year in the shortened 2020-2021 season in January. Harris, just like any other new bowler on the WCS circuit, fought and clawed his way out of the pack of new bowlers and has railed off four wins in a row, the most recent being his most important one to date, his first title match appearance and winning the Northeast Heavyweight belt over 3-time northeast and former world champion Miguel Acobo at Laurel Lanes in November.

Harris, closing in on his first title defense coming this Saturday, has the task of going up against Chris Aponte (X-It Woundz). Chris Aponte, arguably one of the best bowlers to not win the heavyweight belt, will be by far Harris’ toughest challenge in his WCS career.

Aponte has made several stints in the past on the heavyweight list, including two appearances in 1v2 matches, but never made an appearance in a title match…until we come to this Saturday. Aponte has the experience in 1v1 matches, let alone WCS matches. Will he be able to control the momentum of this match towards his first title win, or will Harris be able to control the tide and momentum of this highly anticipated high scoring match towards his first title defense?

We predict that most likely, Aponte will get comfortable quickly in the early going, and once he gets settled in, he becomes a freight train that’s almost hard to stop. Aponte claims the title in a 4-2 victory.

Bryan Andes continues his reign with the Cruiserweight title since winning the belt over teammate Raul Renteria in June. This marks a 5-match title match winning streak, knocking off tough challengers along the way (Raul Renteria, Tyrone Curry, an undefeated Justin Doslik at Battle Bowl, Jae Kim, and Mike Dickey). Andes aims for his 5th consecutive title defense and also looking to extend his winning streak to nine consecutive matches.

Standing in Andes’ way of these accomplishments…Chondite Faison. Faison has become a veteran of the Cruiserweight division in his years experience on the WCS circuit. With his 22-11 record, he has three title match appearances as the Challenger (1-2 in those matches, losses to Josh Valdes, and Raul Renteria). Faison, a former champion, won the belt back in March 2019 over Sal Chiaravalloti (Reaper Crew) but has yet to record a successful title defense. Faison has fought his way up and down the list, surviving elimination over and over since losing the belt back in April 2019 and here he is. This Saturday, Faison makes his FOURTH title match appearance as the challenger.

What will give way come this Saturday? Andes’ 8-match winning streak and 5 match title match streak or Faison’s long experience of title matches in years past? Who will come out with the title?

We predict that if Andes wins this Saturday, it will be his ability to lock in and stay locked in for long periods that will overcome Faison’s experience in title matches. However, in Faison’s backyard (or almost), Faison familiar with the houses on the island more so than Andes, Faison gets off the title match losing slide with a 4-2 victory where Game 6 will be a nail-biter.

For the first time in the Voodoo franchise history, they have a belt home at Hamilton Lanes. Jeff Wiltsey Jr. was able to take down an injured William Wahnon in a 4-0 sweep to win the Northeast Welterweight belt at Northeast Team Relay last month. As a new UBA WCS Welterweight Champ, Wiltsey Jr. is now looking to successfully make his first title defense and continue as champion. Wiltsey Jr. has railed off 5 wins in a row since losing his debut match back in March of this year.

That one loss on Wiltsey Jr.’s record…his opponent this Saturday. The challenger James Keith is the only bowler to beat the current champ to date so far. Wiltsey Jr. and Keith both made their debut in March of this year. Keith got the best of Wiltsey Jr. in that first matchup. Since then, Keith has posted the same number of wins as Wiltsey Jr., but this will be the highest on the list both these bowlers have made to date. After Saturday, one must fall.

Does Wiltsey Jr. get even in the head-to-head matchup with the challenger James Keith, or does Keith have his way once again, go 2-0 against Wiltsey Jr. and give The Chosen Ones their first belt in their franchise’s history?

We predict that Wiltsey Jr. will continue to ride the wave of success in claim his 6th win in a row in a successful defense, 4-2.

If there is anything that the DMV has stood out for in recent time in the WCS, it is the representation in the Classic Tag Team division over anything else, seems that the DMV is having a showing among the Classic Tag Team Title Belts. Body Bagz won the CTT belts at the Northeast Team Relay over fellow DMV from Contract Killaz Mike Waltz/Salome Samuel. This marks the duo’s 2nd time as the Northeast Champions. Their last time as champs came almost three years ago when they won the belts back in January 2019 (Higgs/Mobley defeated Jonathan Dansbury/Troy Gafgen 4-3 at Northeast Draft for their 1st title match win).

Higgs/Mobley first challenge on their second run as champions…more DMV representation!!! This time, it is Kryptonite’s Naomi and Bobby Reece as the challengers. Naomi Reece is a former Classic Tag Team champion as they won a few months before Higgs/Mobley (Naomi Reece and Rob Bateman defeated Rob Geyer and Tyrone Curry in October 2018 to win the belts and became the second team from the DMV to win the tag team belts.

We predict that Higgs/Mobley will successfully defend and retain their titles in a game 7 nail-biter!

In the Northeast section of the World Championship Series, when you mention “Uncapped Tag Team”, you have to think of “Dysfunctional Bowlers”. The uncapped division started in September 2019. There have been a total of 13 monthly matchups so far to date prior to this month (December 2021). The Dysfunctional Bowlers team whether it was a combination of Raul Renteria/David Nagelhout or Matthew Frei-Funk/David Nagelhout, this team has won to date ALL 13 matches! A feat no other team or bowlers has done since first joining any division in the history of the World Championship Series (at least in the Northeast, Kevin Decker can speak for the Southeast if any bowler/team has accomplished a feat as such). 13 match wins in a row, 10 in a row in title matches dating back to January 2020, 9 successful title defenses, and a few pretty pennies to go with all those wins! What else do you do at this point? Go for 14!

When you compare the greatest tag teams in our history, this combo has to be up there and undoubtedly the best in this division to date! The argument…Chris Hedges/Rocco Mazza and their run in the Classic Tag Team division. Dysfunctional Bowlers’ next opponent…Chris Hedges/Kevin Menendez. Hedges is back once again in another title match in tag team action. He is looking to become the second bowler to have won both the Classic and Uncapped Tag Team belts (first was Raul Renteria when he won the Classic belts with Bryan Andes and the Uncapped belts with David Nagelhout in January 2020 at Northeast Draft, 30 Strikes). Hedges is partnered up with one of the best former Cruiserweight Champions the Northeast had in WVS history in Kevin Menendez.

This will be a “must watch” match for the ages. What happens on Saturday? Win #14 in a row for Dysfunctional Bowlers or our second bowler, Chris Hedges, to win both tag team belts?

We predict that Dysfunctional Bowlers with the righty/lefty combo will be the difference in this matchup and claim win #14 in six games!