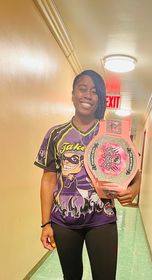 History was made in November as Miguel Acobo lost the title just as quickly as he regained it. Acobo loses it 4-3 to Will Harris. Acobo was up in the match until Harris pulled out the great equalizer – Urethane. Dun dun dunnnnn. With that, Harris starts his reign as heavyweight champion.

Another title change happened when Tiffany Smalls upended Hermie Hannibal to win the Vixen’s Northeast Championship. For Hannibal, it’s been a long reign but Smalls had her number for the whole day. Smalls, a long-running veteran on the chart, finally gets her due – and the title.

The Classic Tag Team Belts will stay in the DMV – but they have new guardians. Body Bagz regained the titles for reign #2, as they edge out Contract Killaz. Will the belts stay around the champs waists for awhile?

The last singles belt to switch hands was the Welterweight, which is now held by Jeff Wiltsey Jr. Wiltsey didn’t waste much time, dispatching William Wahnon 4-0 to win Voodoo’s first belt. It’s also a great moment for dad Jeff Wiltsey, who gets to see his son grab gold for the Wiltsey family.

Dysfunctional Bowlers went 2-0 in their matches. Bryan Andes held serve against Mike Dickey, while the Uncapped Tag Team got pushed to 7, but made it past the Pocket Kingz.