Recap of all results from February 20’s action. 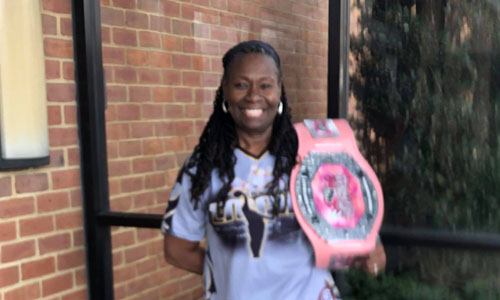 We had a spirited day one of UBA Northeast Title defenses at Bowlerama. Three title defenses were successful, and we have a familiar face showing up on the other one. Let’s get to the results:

This was not the best match of the evening (you’ll see that next) but it was one of the more dominant ones. Yvette Ford shoots a 299 in game three on the way to defeating former Northeast Champion Mia Williams in a 4 game sweep. Ford was lined in from Game 1 and didn’t let off the gas pedal at all during the match. And part of this, as usual, was my fault. This conversation happened right after I gave my prediction of Mia Williams winning in 7.

Yvette: Really Williams in 7… Oh by the way, my only loss to Sagirah we went 7. I know you don’t know me and I haven’t been bowling much UBA Jersey stuff but you might wanna do your homework

Me: I know its going to be the best match of the weekend

. You’re both excellent. Keep in mind I’ve seen you bowl

Yvette: Not often enough obviously…. We both have not been bowling much this season and both been a little sick or alot of sick but should be a good match

Me: Should be a great match. That’s the match im looking forward to the most.

As we all know, I don’t make any sorts of wagers on these matches, so these are all for fun and entertainment purposes (at least for me), but Yvette had something to prove and she proved it. And FYI, Yvette is undefeated in the WCS if her opponent is not Sagirah Wheeler. So I shall take my piece of humble pie and move on.

Even when George Williams took the first two games,you still had a feeling that this was going to go the distance. And go the distance it did – Acobo won the next three games (including one where he struck out in the tenth to seal off a potential 279-278 game) before Williams took game six and forced the final game of the series. In that game, both men exchanges marks until Williams faltered down the stretch and Acobo did what former World Champions do – he made him pay for it. El Tiburon takes the last game 200-177 and becomes the new Northeast Heavyweight Champion. Team Meme Mafia retakes some of that gold.

This match was a little on the messy side, and you could have started smelling the upset when the express took a 1-0 and 2-1 lead in the match. However, DB was able to tie it up at 2. The key was in game 5 where the SLE blew a 20+ pin lead by opening on 4 out of the last 5 frames, to let the Bowlers escape. DB got the momentum and didn’t relinquish it where they closed out the match in Game 6 to successfully hold on to the tag team titles.

Part of the reason why you could have smelled upset on the Tag Team side is that Renteria had nothing going on in his Cruiserweight Title match against Jeff Wiltsey. The problem for Wiltsey is that he had nothing either; both bowlers combine to throw ONE game at 200 or better. Yuck. Renteria, in no other was to put this, survives a slog-fest and holds on to the Cruiserweight title with a 4-1 win. Dysfunctional Bowlers hold on to two of their three belts, with the Uncapped Belts to be defended on Sunday.