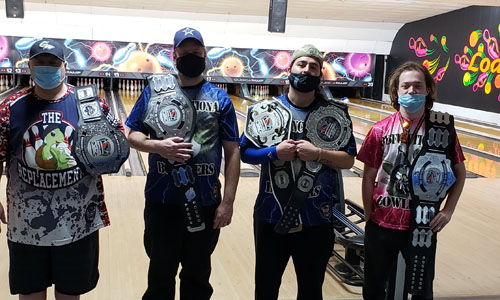 The UPS Truck may be late for package deliveries, but for George Williams (The Replaceables) and the Dysfunctional Bowlers, it came right on time. Williams defeated Alex Prell (Da Hit Squad) 4-1 to win the Northeast Heavyweight Title while the Dysfunctional Bowlers swept Suicide Squad 4-0 to retain the Uncapped Tag Team Titles and Raul Renteria picked up the Cruiserweight title for the third time with a 4-2 victory over Bill Cron.

The Heavyweight Title match was split 1-1 after 2 games, with Prell shaking off some rust in tying up the match. But near the end of the game, it looked like Prell re-aggravated a leg injury he suffered earlier on this year and while he was still potent, he wasn’t 100%. Williams took advantage, shooting a 745 on the back three games to win 4-1 and take his first piece of UBA Hardware. That now makes the third titlist Williams defeated (behind Ray Smarsh and Niko Rivera) as he and his companion ‘Roxie’ sets his goals to still have possession of the belt for Battle Bowl. Thus starts the reign of King George I.

Meanwhile, we have the third reign of Raul Renteria, who wins the vacated Cruiserweight Belt with a 4-2 win over Bill Cron (Class Axe). Cron came hard out of the gate with a 245 only to see Renteria respond with a 268 in game 2. The turning point of the match was Game 3, where Cron needed a strike to take a 2-1 lead in the match and left a 6 pin. That opened the door for Renteria to steal the game with two in the tenth and he does just that. Cron’s game went downhill following the deflation, shooting a 147 for game 4 and missing the transition on game 6. Renteria looks to make 2021 his year of holding two belts at the same time, and if he wins on Sunday, then mission achieved.

As much drama as we had on the singles match, the Tag Team match…notsomuch. It was business as usual for Dave Nagelhout and Matthew Frei-Funk, as they sweep the Suicide Squad (Barry Allen and Allen Lewis) 4-0 and retain the belts. There were no highlights here – except that a platter of eggs with peanut butter was eaten after losing a bet that thy wouldn’t get swept. Oops.

The fun continues with two more title matches on Sunday in the Northeast and the Heavyweight Championship in the Southeast up for grabs.