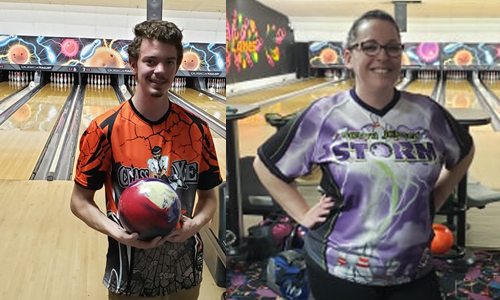 When the UBA has two events at the same time, and when some of the ‘Heavy Hitters’ go down to South Carolina to compete at the Unholy Alliance (and with thousands of people attending the sold out event, why not go?) it gives people that usually don’t get the opportunity to grab the spotlight the chance to make their mark in the UBA. Class Axe’s Brandon Ulrichs and South Jersey Storm’s Virginia Holden took complete advantage and are now your Champions of 2019’s Last Man and Last Woman Standing, respectively.

Ulrichs, a 20 year old who’s just making his way into the UBA environment, snuck into the play-offs and took it from there. With his father looking on Ulrichs took on Daquan ‘Day Day’ Green in the finals and defeated him to win his first singles UBA title.

Class Axe has had a history of success in this event. Owner William Cron has said that the club loves hitting the Lodi shot, and it shows as Audrey Rodriguez was the champion last year and made the playoffs this year. However, her shot at a repeat was denied.

While Ulrichs drove down from NY, Virginia Holden drove up from South Jersey and she made the trip more than worthwhile. Holden had a very tall order in the finals, facing off against 4-time WCS Vixen’s Champion Danielle Merino (who came to hang out to watch her teammate Carlos Jimenez win the Northeast Cruiserweight Title and made a nice amount of pocket change in the process).

While Merino overpowered most of her competition the whole entire way, her carry left her in the finals, where it turned into a grind. Holden took the early lead and held on for the win and the Championship.

The next Northeast event for the UBA will be the Team Relay the weekend before Thanksgiving at Laurel Lanes. More information to come.