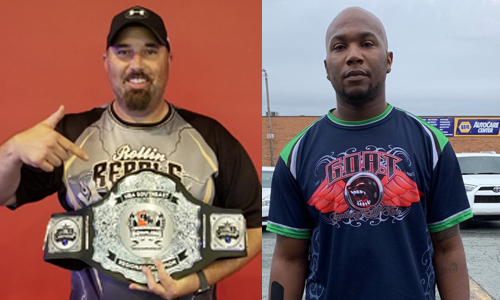 Coming up at SE Unholy, we have 3 belt matches set to take place and none of them are as anticipated as the Heavyweight Match between the champion Jerry Didway and the challenger, and former champion, Dre Gaither.
Since defeating Nick Christy for the title, coming back from being down 3-1 I might add, Jerry has had 2 successful defenses against Charles Withers (Dirty South Legends) and last month against Max Fishman (GOAT). Dre has been climbing back towards this opportunity the past few months and defeated Chuck Richey at AMF Winston to secure this match. He was down after game 1 when Chuck shot 280 but Dre still felt he was “in the driver’s seat”. He knew he was one of the best bowler’s in that house and even won his first UBA title there. Dre won 4-1.
What is in a nickname? Jerry’s UBA jersey proudly has the name Black Cloud. The back story with it is rather interesting. Jerry use to own Untouchable where he did not have fun with it, so he gave it to Brian McLean and joined Beast Squad. When issues arose there, he decided to join Rollin’ Rebels after Kenny Snead had been asking him for quite a while. People said he was a “Black Cloud” for teams and the nickname stuck.
Now “Flash” is different. Dre’s favorite superhero is The Flash. One day, en route to a 300, he literally ran-out a strike to the other end of the bowling center and back. Someone called him Flash then and, that fast, it stuck.
While the champ, Jerry has defeated the NE Champ (Battle Bowl X) but has lost to UBA World Champion Dennis Killough twice. His first attempt against Dennis came at SE Gauntlet. Jerry was up 2-1 but “Dennis played some defense to mess my line up so my shot went away.” He was then unable to find a good shot and it got in his head and caused him to lose the match. The second attempt was at BBX and no one would have beaten Dennis the way he threw the ball that night. Jerry did learn from his first match with Dennis a lesson that he still carries with him, when “having a hard time…start over from the beginning and rethink everything.”
Instantly after becoming the #1 contender, Dre was in competitive entertainer mode and was declaring that he was soon to be a 2-time champ. Dre believes that the WCS needs more excitement and should be more entertaining. He plans to have the belt front and center by taking it with him, talking trash, and making videos. For those wanting to be more entertaining, you got to win a title first. It will give you the clout to truly stand out. Make your mark and be original.
The winner of this match will defend the title in November against the winner of the #1 contender’s match between Nick Christy and James Kniffen. Both men pick Nick in that match- Jerry because he knows how hungry Nick is to get back the UBA World Championship and Kniffen has been bowling great so Dre wants no part of him.
At the title match on October 19th, Jerry is expecting Dre to talk trash while Dre knows he will hear it from the Rollin’ Rebels in attendance. Jerry loves the bigger crowds that the UBA events will have for these matches going forward. This will be the first head to head match for these two. They competed in a triple threat at Mega Bowl this past season, but it is the first time they will be one on one. Both of the men are great bowlers and will provide an awesome match!!