The Heavyweight and Vixen’s titles stay put, but nothing else does and Renteria makes history. 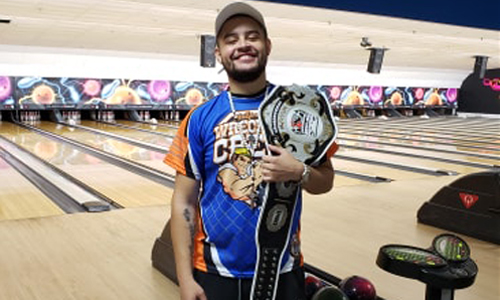 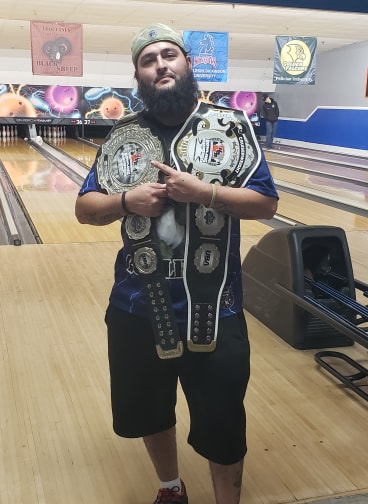 History was made at Last Man and Last Woman Standing. Raul Renteria probably wishes that it lasted a little bit longer. Renteria, along with teammate Bryan Andes defeated Showtime in a thrilling 7 game match to take the Northeast Tag Team Titles. Being that Renteria had his title match on Sunday, he had at least 24 hours to hold both the Northeast Cruiserweight and Tag Team titles at the same time – only the second person to accomplish that feat (Miguel Carrion was the first)

See that picture above? It was factually accurate for 24 hours.

In a match-up between Cruiserweight Champions, Jimenez came back from oblivion in game 3. wiping out a 40+ pin deficit with an 8-bagger. Jimenez uses that momentum for the 4-1 victory, with the front 9 in the deciding game of the match. That gives Jimenez the belt for the second time in his UBA career, and the first as a member of The Wrecking Crew. 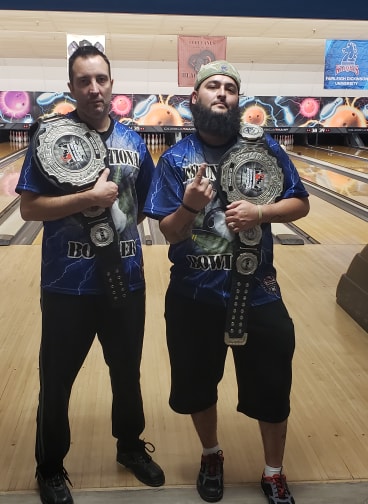 Although Renteria doesn’t keep both belts, he still retains the Tag Team and now must defend that for the first time out.

As for the other singles titles, the champions get to defend them for at least one more time. NWO Wolfpack’s Bobby Hall retains the Northeast Heavyweight title against Tribe Called Nest’s Niko Rivera. Though the score was 4-1, it was a lot closer than what’s indicated, but the swing point came in Game 4, where Rivera had a chance to tie the game and left a split Rivera did not pick up. That allowed Hall to take Game 5 and obtain the win.

The Northeast Vixen’s Title Match (which you can see on the site) had Jones dealing with both a cold and #1 Contender Ashley Gottlieb. After both Vixen’s split the first 2 games, the match went grindhouse-style. Strikes were rare to take ahold of, but Jones snagged more of them to take the match 4-1.

Next up – November and the Team Relay. More to come.