If you had a belt and were defending it at Unholy Alliance weekend, you don’t have it anymore. 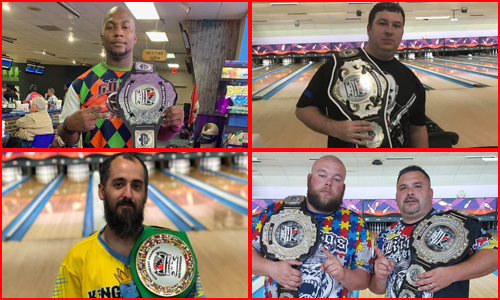 One of the reasons why a ton of people flock to The Unholy Alliance in the Southeast (yes, that includes the Northeasterners) is because of the ‘Anything can happen’ unpredictability of the event and the WCS matches. True to point, it happened to be the case this year as well, as all four titles that were defended changed at Unholy Alliance weekend in front of a racous audience.

Let’s start with the Heavyweight Title. Champion Jerry Didway knew he had a fight on his hands against G.O.A.T.’s Dre ‘The Flash’ Gaither. And a fight it was, as most of the games came down to the 10th frame. Didway could not capitalize on enough of them and Gaither rolled to a 4-1 victory to become the new Southeast Heavyweight champion.

Usually when the Cruiserweight title switches hands, the winner gets to keep it for awhile. Not this time, as G.O.A.T.’s Chris Smith is one and done and drops the strap to Hitmen’s Rudy Brantley. Brantley is one of the few (but growing) people who have held both the Cruiserweight and Tag Tem titles. But in this case, unlike Raul Renteria this past weekend, did not hold both titles at the same time. Though if he can keep it long enough….

…maybe he will be going up against the King’s Court, who swept The McLambs (Synergy) 4-0. The team of Jim Koepfler and Jeremey Maier now add the Classic Tag Team titles to the Court’s list of accomplishments (they have held the Heavyweight and Vixen’s gold). Now they need someone to snag Cruiserweight and Welterweight.

Finally, the Welterweight title is now in the hande of Chris McKnight, who defeats Mike Wakefield Jr. in a back and forth affair. Wakefield got more breaks and in bowling, sometimes that’s the name of the game.

Now will there be stability at November’s Team Relay? Or will we have the same chaos that the UBA is known and famous for? We’ll see in November.