Is the Shogun dreaming of defeating Bryan Paul? 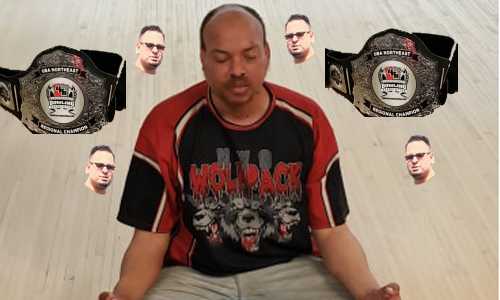 This is the first time this season that (almost) all eyeballs will be in the Northeast, featuring a WCS title defense and the start of the Team Rankings. Let’s see what the end of September brings us…

10. WCS SOUTHEAST: PATRICK KEIFFER VS. JAMES KNIFFEN
Former Southeast Heavyweight champion is 2 matches away from the title. Kniffen is just as close – but can he defeat experience?

9. TEAM RANKINGS: NE
This is the first time the All American conference north of Albany is getting involved. Who gets the inaugural win?

8. WCS NE WELTERWEIGHT: ROCCO MAZZA VS. KENNETH WASHINGTON
Should the former Tag Team Winner Mazza win this one, he moves into the Top 4. Just like #10, Washington needs to deal with Mazza’s experience in these situations.

7. TEAM RANKINGS: NY
Based on the numbers, this looks likes the best showing for that grouping so far. It could also mean the money could be even better. Will it be?

6. WCS NE TAG TEAM: DYSFUNCTIONAL BOWLERS VS. SUICIDE SQUAD
Is this where Raul Renteria gets back on the mountain? Or is this where WIlliam Wahnon and Jessica Rojas can get their first title shot?

5. TEAM RANKINGS: NJ SOUTH / NJ NORTH
This is the first time the districs are split due to the number of teams. Will the competition live up to the future hype that’s going to happen?

4. WCS NE VIXENS MATCH: JESSICA ROSAS Vs. JALEESA TAYLOR
Both bowlers have a lot on the line here, but some notes; a win for Taylor gets her second title shot. Should Rosas keep winning here and in Classic Tag Team, she could be the first Woman to hold both the Vixen’s Title and a Tag Team Title, and she would do it before the end of 2019.

3. WCS NE CRUISERWEIGHT #1 CONTENDER’S MATCH: MALACHI MOORE (Mass Destruction) VS. CARLOS JIMENEZ (Wrecking Crew)
Most of the experience would put the money on former belt-holder Jimenez. But Jimenez is still not 100% due to surgery, so there’s a chance you could be hearing #1 Contender Malachi Moore…which would make certain people’s phones explode.

2. WCS NE HEAVYWEIGHT #1 CONTENDER’S MATCH: NIKO RIVERA VS. ROB BATEMAN
Though there would be one thing that would make more phones explode – and that would be the potential name of WCS NE Heavyweight Champion Rob Bateman. Former champion Niko Rivera is going to try to put a stop to that, but regardless of who wins, you’re going to have a very loud #1 contender in October.

No one has said Bobby Hall’s road to keeping the title would be easy. Bryan Paul is not going to make it easier – especially since he hit some massive numbers over at Westbrook during Unholy…and that’s where the match is going to be. Yipes. Can Hall hold on to the title or will the DHS express steamroll out of September with a belt?

We’ll see everything this weekend. Stay tuned for updates.